New info about the I.T. Helpdesk


The I.T. Helpdesk is no longer located in the library. The information below is from Tony Dedman, Director of the I.T. department and explains some of the changes that have been made.

2. Hours of operation:
Monday through Thursday: 8:30am-12pm
All other times are by appointment only.

3. Equipment Drop-off:  To drop off a Cumberland-owned or provided laptop (No personal equipment), coordinate with the Helpdesk during the days & times above.

5. Phone Messages during or after hours:   You may also call 547-1240 at any time and leave a detailed message.  We also ask that phone messages be followed up with a Technology Request  to ensure accurate details and contact information.
Posted by Vise Library Staff at 3:33 PM No comments:

Email ThisBlogThis!Share to TwitterShare to FacebookShare to Pinterest
Labels: IT

Check It Out...at the Vise Library: The Leftovers

What if one day, completely out of the blue, thousands of people worldwide just disappeared? How would you react? What would happen to your family and society in the coming days, months, and years?

It sounds like a story from the mind of Tim LaHaye, author of the Left Behind series, but Tom Perrotta's novel The Leftovers differs in that it envisions a secular Rapture--or, as characters in his novel call it, "The Sudden Departure"--in which people all over the world, including Jews, Muslims, atheists, Christians, sinners, and saints alike, disappear at the same time. With no scientific or religious explanations to fall back on, the characters in The Leftovers must deal with the Sudden Departure in their own unique ways. 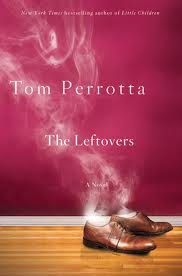 Perrotta's novel follows the Garvey family in the wake of this upheaval. Kevin Garvey, the mayor of Mapleton, a small town where the novel is set, tries to put the terrifying event behind him and move on with life. His wife, Laurie, finds herself sucked into a strange cult, the Guilty Remnant, who take a vow of silence and wear all white clothing. Tom, the Garvey's college-age son, begins to follow a man who calls himself "Holy Wayne" and believes he can heal people by hugging them. Daughter Jill simply starts acting out in ways a typical teen girl would: drinking, partying, and cutting class. The Garvey's, and those close to them, find themselves awash in chaos and confusion in the post-Sudden Departure world, yet they are still able to connect to others and find love and hope, even in the most bizarre circumstances.

The Leftovers is both funny and dark, satirical and gentle. Perrotta is a master at revealing the hidden desires and fears among the most average, mundane people. His characters are deep and multidimensional, and he lets no one off the hook. In The Leftovers and in his previous work, Perrotta has satirized religion, politics, suburbia, and higher education among other things. His novels are often hilariously funny, but also have a knack for making the reader wince with familiarity. He holds up a mirror to American society and we get to see it all: the good, the bad, and the just plain weird.


Posted by Vise Library Staff at 1:48 PM No comments:

This summer, members of the Vise Library are participating in a Young Adult Summer Reading Challenge. We have received copies of s...